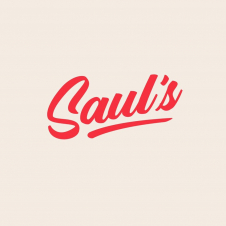 Taking inspiration from New York’s delis and diners, in mid-2020 Leor Haimes and Elliot Koren – the guys behind Bentleigh East’s Time & Place – opened the first Saul’s Sandwiches in Carnegie, in the city’s south-east.

In less than a year they opened a second shop focusing on hearty, loaded sandwiches in Hawthorn, and now a third in Bentleigh East. “It got to a point where we were selling out of sandwiches almost instantly at Time & Place and began to get a bit of a reputation for a delicious sandwich, so we decided to create Saul’s during the pandemic,” Haimes says.

Like its siblings, the latest outpost has a diner-like feel, with red-and-white tiles and a sprawling counter, as well as indoor and outdoor seating (for non-locked-down times). Splashed across the creamy white exterior is “Saul’s” in unmissable bright red cursive.