Situated at the spiritual home of Penfolds, the restaurant is located just 8km from the city of Adelaide, approximately a 15 minute journey by car and situated adjacent to the Magill Estate Vineyard, Winery and Cellars.

The restaurant combines modern architectural style with the natural attributes of its Adelaide foothills location and historic surrounds and delivers a contemporary and comfortable fine dining atmosphere. Contemporary food, an extensive collection of Penfolds wines, exemplary service and stunning views completes one of Australia’s finest food and wine experiences. 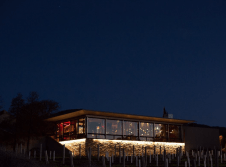 With an international career spanning over 17 years, Melbourne-born Scott Huggins refined his culinary expertise, whilst working for several of the world’s high-end, Michelin-starred restaurants. With a passion for creating fresh, natural dishes, Scott honed his skills in the kitchens of culinary destinations such as The Royal Mail Hotel in Victoria, Iggy’s at The Hilton in Singapore and Micolau Hotel and Restaurant in Spain. Upon his return to Australia in 2013, Scott joined the Magill Estate Restaurant team.