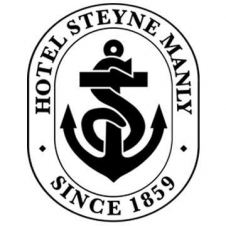 Back in 1859 a man named Henry Gilbert Smith takes a punt and builds a hotel right on the beachfront at Manly, Long before the area became a dream home for residents and a dream venue for tourists. There was no sea wall in those days, and shortly after the Hotel Steyne opened a huge swell swept around nearby Fairy Bower point, washed acrossed the sand, and swept the drinkers out into the Corso.

Just four years later, in 1863, most of the 200-odd people who lived in Manly drank in the Steyne…not a good thing for the other republicans…so a mysterious fire destroyed the pub.Good old Henry Smith called on his colonial architect mate Edmund Blacket to design another hotel, which opened on the same site in January 1864.

Then, for the second time, a mysterious fire struck in 1923. Not a problem, up went another pub…same place…same name…more bars…more accommodation. That building stands to this day.